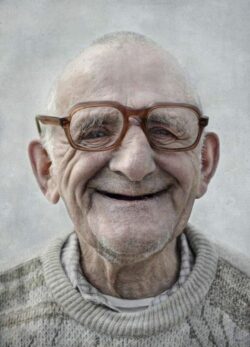 My father can’t find his teeth.  He is certain that someone stole them. Between the scowling and cursing, I realize he looks like one of those old men who sat up in the corner of the Muppet Show. I can’t help it, my mind drifts sometimes.  By this time every family member that’s visiting him is looking for his teeth but none of us can find them. For most people it would be good enough just to look in someone’s mouth and voila there you go. But my father has fake teeth.

Let’s back up a bit.

My father lives now in a medical-assisted community. He shares a room with a nice old gentleman, and there are many people on his floor.  All of them are his friends, and all of them are out to get him. His teeth specifically. He begins to point out some of the possible culprits, and we all start to go over to each of them and ask about my father’s teeth. Every one of these people seem to like my father a lot, and they also have no idea where he might’ve put his choppers.  Finally, after a good half hour of good cop – bad cop, where one of us asked nicely and then my father comes in accusing the person, I finally see a nurse.

I find that I have a little bit of an edge of my voice when I start to ask about where my father’s teeth could be and who could’ve taken them. The nurse giggles a little bit. She can tell that I am not finding it too funny.  “This happens about once a week,” she says, in the kindest tone possible. I’m looking at her like a jigsaw puzzle that I can’t figure out. “Your father is a bit of a social butterfly on the floor. He also likes to tease and kid with the other residents, and in all honesty they love him for it. The problem is, he forgets that he hides his teeth under different people’s pillows to scare them at night when they wake up. And because of his Alzheimer’s, he forgets that he does it.”

It feels like the nurse just grabbed both of my ankles, turned me upside down, and shook all the change out of my pockets – or rather all the wrong perspectives out of my head. What was I thinking? My father has Alzheimer’s. I took the very first perspective that I heard and made it truth, without considering that someone else might have an equal or maybe even more valid perspective than that of the man running around hiding his dentures under pillows.

How true is this of all of us? How many times do we just believe what we want to believe, without doing a little bit of research? Sometimes it’s just easier to take the truth we’re given than to use our awareness and our ability to discern truth for ourselves.

So far, the truth that I’ve just gotten adds up to what I KNOW about my Dad. He is a jokester and he makes friends easily. Him hiding his choppers under somebody’s pillow is not surprising to me. In fact, it is easier to believe than someone on the third floor of this medical facility having a real thing for my father’s fake teeth.

So, now that I’m paying attention, using my ability to discern what I know of my father, AND keeping my mind open to different possibilities, I look a little closer.  The nurse’s revelation has helped illuminate another truth that I think I might’ve missed: my father has made real connections with these people on his floor. None of them seem to react to these accusations of teeth theft. In fact, they seem to enjoy the bit of drama that he’s providing even in the moments where he’s not fully himself.

My father can make connections with people because he treats everyone as equals. No one is better than anyone else in my dad‘s eyes. It has allowed him to bring real life and community to a place that could’ve very well stayed just a facility filled with people who ‘kind of’ knew each other.

I kindly begin to ask each one of my father’s neighbors if I could look under their pillows. They all oblige. None of them look at me like I’m crazy, most likely because each one of them has found my father’s teeth under their pillow in the middle of the night at least once when they least expected it. It only takes about four inspections, and his dentures are retrieved.  My father is momentarily out of his fog, remembers what he did, laughs a bit and whispers, “Did I get him Louie? Did I get him?”

I give him a kiss on his forehead. “Could you stop scaring these people!“

“Oh, they love it, Louie. They know I’m only kiddin’,” he says. I chuckle a bit. He’s right.  After taking the time to give my father’s perspective my full attention, I know he’s spot on. 😊